The Nine Scariest Recruiting Stories We Have Ever Heard

This article detailing the scariest recruiting stories was originally published in October 2020. All relevant statistics and copy have been updated as of October 2022.

Halloween is here once again, which means it’s time for us to “scare” the spookiest, creepiest, and downright craziest stories our recruitment consultants have! Sometimes it’s not ghosts or goblins that are the scariest thing you’ll encounter. Sometimes, the creepiest thing you’ll see is a candidate who decides that the best thing to do is show up to their job interview well over the legal limit.

Put on your fuzzy socks, grab your comfiest blanket, and get that bowl of popcorn; we’re about to send shivers down every recruiter’s spine with this collection of recruiting stories.

Like all good scary stories, these tales are true; only the names were changed to protect the innocent (or not-so-innocent). The accounts are first-hand, in the words of the talent acquisition expert who lived through the experience. Happy Halloween!

Ghouls, goblins, and monsters, oh my! @IQTalent gets in the Halloween spirit by sharing nine of the scariest #recruiting stories we’ve lived through:Click to Tweet

I scheduled a call with a candidate for a Software Engineer role whose name was Sai. There was no photo on their LinkedIn profile, so I was unsure of their gender.

I called at the time scheduled, and a woman answered. The conversation started with her screaming that a ghost was in her house and the house was haunted. She was very scared and even wanted me to give her advice on what to do, and she didn’t want me to hang up the phone as she was afraid of being alone. She told me that she didn’t want to go outside because the ghost was going to hunt her, as happens in “American horror stories” (literal words). After several minutes of listening to her scream and trying to calm her, I finally hung up, thinking I would just add this to my Rolodex of creepy recruiting stories.

On the following day, I received an email from the same candidate saying that they didn’t receive any call at the time scheduled. I told them that I did call, and a woman answered and even checked with them that the phone number was correct, and it was! We scheduled again, and when I called, a man answered (the real candidate) and said that the phone never rang the previous day. We had our conversation normally and moved him forward in the process, although he was finally not selected.

To this moment, I never found out who I talked to that day. Talk about being ghosted by a candidate! 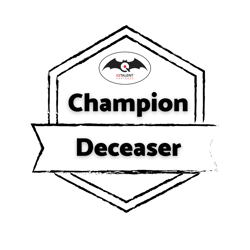 A few years back, I worked at one of the big-name executive search firms. The policy of my firm was never to delete a candidate from our ATS. However, every now and then, we would attempt to contact a candidate and discover they had passed away. We would then label the candidate “deceased” in our database. Unlike the more common “candidate ghosting,” this is far more literal.

One year, I “deceased'' 7 candidates within 11 months, more than any recruiter in history. A deceasing record! My colleagues lovingly nicknamed me “The Reaper.”

Once upon a full moon, we had to reject a candidate after an onsite interview. The process went forward with little fanfare or drama, but the real twist was later revealed.

The candidate was moonlighting as a magician (it is worth noting that this was not the reason for their rejection, who doesn’t love a little bit of magic from time to time?)

A little while later, a new candidate appeared in our recruiting pipeline. This candidate had some striking similarities to our old magician friend. Tiptoeing forward cautiously, we asked if there was any relation to or if they knew the magician candidate.

What came next made our jaws hit the floor and solidified its place in our collection of weird recruiting stories.

To back up his claim, the candidate then whipped out his phone to show us doctored photos and fake social media profiles! Our recruiters were too sharp to be fooled. The magician then showed us his real disappearing trick, ghosting us after the encounter!

I think we all know what the scariest thing in the world is, and no, I don’t mean that monster hiding under the bed. No, the actual scariest thing to witness — a grown man that is throwing a temper tantrum. When I was working for a different firm, I had the unpleasant experience of first-hand witnessing this event.

A Senior Director at my firm started screaming, stomping his feet, flailing his arms, clenching his fists, and turning the color of a ripe tomato in the face — all because he wasn’t getting his way.

The worst part? This was not a one-off occasion. This Senior Director threw tantrums like this multiple times a month! After moving on from the company, I came to find out that he was later convicted and sent to prison for assault.

One of my craziest recruiting stories involves one of the most awkward candidate interviews I’ve ever experienced. The president of my company hopped on a flight with me to meet a candidate in person. We flew over 2,500 miles to sit down and interview this individual, but it took less than 10 minutes for my president to decide she wasn’t the right candidate for the job.

He simply said, “I’m sorry, you’re not the one for us,” got up, and left the room. The most awkward silence of my life resulted as the candidate and I were left sitting there shocked.

This should go without saying, but you should absolutely not show up to your drug test or interview under the influence of drugs or alcohol.

I was working on converting a contractor to a full-time employee a while back, and I met him at the standard procedural drug test. The initial alcohol test came back at a .08, right at the legal limit. The contractor denied that he was drunk, instead claiming that the breathalyzer had to be broken. So, we waited for 45 minutes and then reran the test.

Everyone could use their mom to hype them up before an interview. But that doesn’t mean you should invite her to the interview.

That’s right, in one of my recruiting experiences, I had a candidate bring his actual mom to the interview.

What’s more, one of our newer hiring managers allowed the candidate to bring his mom into the room for the interview!

While the mother stayed quiet for the duration of the interview, she felt the need to comment at the end. She spoke up, asking us to hire her son so that he could help to pay for the “new teeth she needed.”

There’s one thing that truly is scary, and that’s an unhinged candidate bent on revenge.

Once upon a time, I forgot to send a candidate a calendar invite for our interview. It was a simple mistake, one that anyone could have made.

Before I had the chance to reach out and apologize, she took it upon herself to call me and berate me for this egregious error. Not only did she think it was clearly an intentional mistake on my part, but she felt the need to threaten to reach out to my supervisor and CEO to get me fired.

This angry candidate then did her research. She found the emails to all of our company’s upper management, including the CEO, founder, and practice managers. She sent a scathing review, demanding I be fired immediately. Not only that, she chose to use some rather non-PC names and terms to describe me, solidifying the toxicity of her personality in writing.

Fortunately, my company's management forgave me and decided it was the candidate that was crazy-scary. We took her out of our database and never contacted her again!

Several years ago, when I was working for an agency, I was in the market for the perfect candidate for a very rare type of software developer.

I found the developer and scored him a coveted interview at a large oil company; we were quite excited for him to fly in for the interview. Until this point in our professional relationship, we had only communicated over the phone or email, so we had never met face-to-face.

When the day came, I went to pick him up from his hotel to drive him to his interview. As I roll up to the hotel, I see him standing there. He was hard to miss since he was wearing a purple toupee.

That’s right. A. Purple. Toupee. While we don’t discriminate based on hair color. The purple toupee was not the right fit for this role!

Our team at IQTalent wishes you a safe, spooky, and fun Halloween. We hope you remember you are not alone the next time you find yourself in a frightening recruiting situation.

You'll Love These Posts Too

Retail Recruiting: A Guide for Holiday Hiring
2022 has turned out to be a crazy year for recruiters. Some industries are experiencing a complete talent shortage and can’t hire fast enough, while others, particularly ...
Keep Reading
Top 10 Gaming Recruiting Tips
This article about gaming recruiting tips was originally published in December 2019. All relevant statistics and information has been updated as of October 2022.
Keep Reading
Tips to Ignite Your Efficiency In Sourcing And Recruiting
This article was originally published in September 2021 and all relevant statistics have been updated as of September 2022. I want to start this article off by saying no ...
Keep Reading